The problem with Childhood Association or…

…how I stopped worrying and bought a Masterpiece Ratbat…

First a little story.
When I was a young un’ I had Soundwave, Buzzsaw and along the way acquired a Frenzy and Ratbat.  Somewhere along the lines I misplaced/traded/lost my Soundwave and friends, all except for Ratbat.

Then, with Ratbat as my only Cassette bot left and in high demand from my Transformer owning friends, I had my best mate’s younger brother come around for a Transformers play.  After he left, Ratbat was strangely absent.  A thorough search around my house did not reveal my little purple cassette.  A short bike ride later and it turns out that Ratbat was in need of a rescuing.  And  a little brother in need of a scolding…

I suspect that due to those circumstances, I am rather fond of not only my original Ratbat (still have him, complete with ears), I am also rather fond of his character.

This therefore led me down the road of desperately after the Masterpiece SoundBlaster figure, for the very reason of getting Ratbat.  *****sigh*****

First off the box.  Coming with Soundblaster it is essentially the largest box for a cassette figure toy EVAR (with a ‘bonus’ recolour toy).  It’s also great to see that despite the excessive box size of the original Masterpiece Soundwave, TakaraTomy had the foresight to completely leave this box to be exactly the same MEGA size. 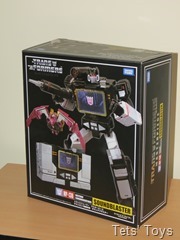 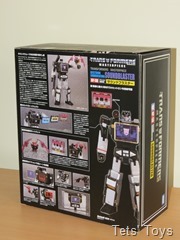 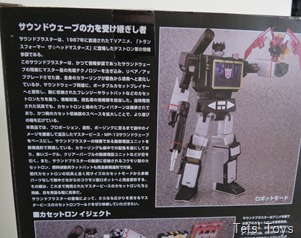 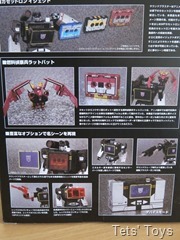 Here’s a shot of the Ratbat cassette on top of the box….So much effort for the little guy.  In a smart move they put an actual size photo on the back of the box, so if you have a look, you can plainly see how much extra padding there really is.  And inside the plastic padding, you can see (once again) how ridiculously over padded this box is. 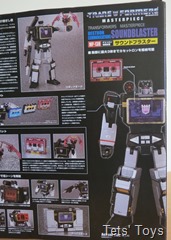 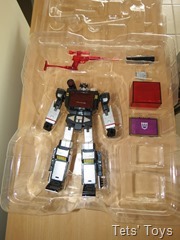 A quick looks at Soundblaster and accessories.  He comes with a “red Megatron gun” as the instructions refer to it  (why it’s red,  I am not too sure).  His weapons, a hand scanner that came with Soundwave, a RED energon cube, a purple chest extender piece.  I naturally assume that if you are reading this you know about Soundblaster’s ‘upgrade’ from Soundwave.  If not, originally Soundblaster could hold two cassettes (as opposed to Soundwave who had space for one), in his chest via a jutting out carrier in his chest.  The Masterpiece Soundwave was designed to hold up to three cassettes, so instead of remoulding the chest piece for SB, they have given us a piece that plugs onto the door to simulate the jutting chest of SB.

Must have found a cheap resource for red see through plastic.  the gun is the mini Megs we’ve seen on Masterpieces at least 4 times before.  It does have a nice Decepticon insignia on.  Energon cube is exactly the same as the others that came with SW.  Annoyingly the energon cube doesn’t attach to the SB Chest extender piece, so you have to remove it to have Soundblaster make some cubes. 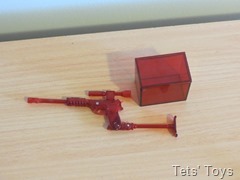 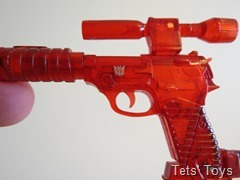 SoundBlaster’s chest looks a bit boring without the extender piece on him as well.  it’s a bit hard to see any cassettes in his chest as well with the piece on. 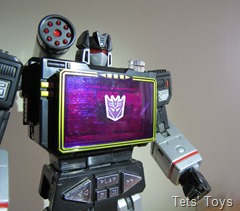 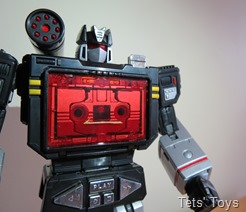 Now, I’m not so sure about the scale factor and all in this, but I do know that these Masterpiece cassettes are the same size as the G1 cassettes.  Great in that they can fit into G1 Soundwave and Soundblaster.  Bad in that I guess that restricts their design a little.  All the other cassettes have been pretty good.  Frenzy and Rumble looked great (although not all THAT much of an improvement over the originals), Ravage, Buzzsaw and Laserbeak were all very nice updates and I was pleased that their weapons were incorporated too.  I guess in a way, these Masterpiece cassettes (and Soundwave actually) have shown me how well designed the original G1 toys actually were.

MP Ratbat is the same cassette size as G1 Ratbat.  Even though I have a nice sexy Encore Ratbat, I have opted for using my original Ratbat from when I was a kid for these photos.  No reason.  Perhaps some loyalty thing.  G1-L, MP-R. 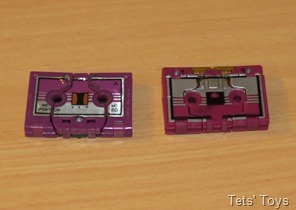 Stickers vs. Paint.  More detail on the stickers, but you get the idea on the MP of what’s going on.  All the other MP cassettes missed out on those extra cassette details as well, so I guess it was to be expected.

The underside is pretty G1 looking too. 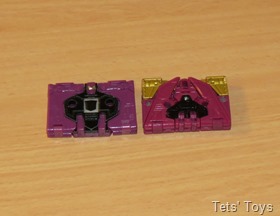 Well, in that it’s black and Purple.

The transformation is rather clever, and is unfolding with a bit of twisting on the jets.  On mine there are a couple of terrifying points though.  Much like unfolding MP Laserbeak/Buzzsaw’s tail fins on their boosters, the joints are tight with little room to move.

The first is when unfolding the head/chest area, it has a double hinge as it needs to swap sides.  however  by far the worst is the hinge the jet packs are connected too.  I am sure there has be a less cringingly bad way to do it, but I can’t work it our.  It;s pretty much like two incredibly close, tight corners rubbing on each other.  I can imagine the tension on the joint is rather high.  Needless to say, I foresee a future of Jetpack-less Masterpiece Ratbats floating around.

I was excited to see Ratbat in robot mode as he looks pretty good from official photos before he was released  I often wondered how his design changed so much from the toy to the cartoon.  But I guess with echolocation, his big ears and better bat looking head make more sense than the one the G1 toy has.  Ratbat’s only articulated points are the wings, with hinges at the ‘elbow’ and another at the shoulder which only works vertically.  Pretty much the same as the G1 figure.  His feet are small but have little bits nicked out of them for shoulder/Arm placement. 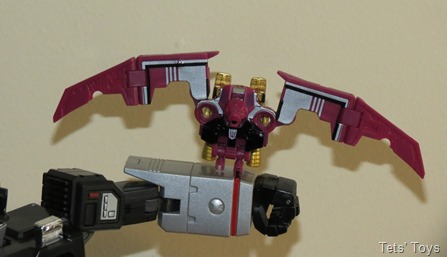 I guess since my most common association of Ratbat comes from the Marvel comic’s “Car Wash of Doom” issue, I see Ratbat as being rather independent of Soundwave/Blaster and a larger character too.  This figure isn’t a larger one though.  In fact he is smaller than his G1 compatriot.  I can see why, the design has a more intricate transformation leading to less being able to be used for bulk.  This makes me wish that the MP cassettes were larger since MP Soundwave is considerably larger too.

I do like the details on the back of his wings as well. 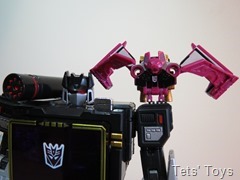 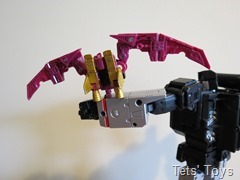 Sitting him next to G1 Ratbat show how small he is.  I suspect that among the MP cassettes he’s the smallest.  I guess from a physiological view that would make sense, but from the Car Wash of Doom, we know he is a LARGE ROBOT bat!

He does look nice in G1 Soundwave’s chest too. 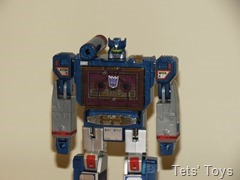 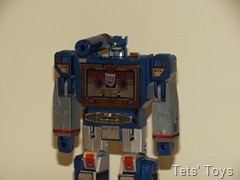 So there we have it.  An incredibly expensive and inefficient way to get a hold of an updated childhood (well loved) character that is a bit of a disappointment in my mind.  As cool as the MP/G1 swap ability is of the Masterpiece cassettes I think it has hampered them a bit too much.  On the plus side, it is testimony to how well designed the original toys really were, especially since Soundwave was from microman  and originally stamped for 1977 (I think).

I am glad I have him now and will be either shuffling off Soundblaster to someone else, or transforming him and chucking out the box and leaving SB somewhere to be forgotten. SB is a lazy repaint, but we all knew he was going to be. Admittedly, he is a tad lazier than I initially thought.  I thought they would make a new tape door, but we didn’t even get that.

Ratbat is nice enough, but constrained by the dedication to making the cassettes the same size as the G1 version.  The tightness of some of the joints and way they have to move is terrifying and I would have like his over shoulder motion sensor/radar things to be a bit larger.  I suspect that is part of the ‘small size’ problem.  Like I said, as a long time fan of Ratbat, glad he’s here, but if I didn’t have that connection, I think I would rather dislike it.

I guess if I didn’t all ready have Soundwave, SoundBlaster and Ratbat would be a welcome addition. I think I have come to the conclusion that for the size of him, the design is pretty good.  I just wish that he had been able to be made a bit bigger, which would have allowed more leeway for his design.  As a toy it isn’t horrible, but it could’ve been a lot better. As it is, the fact that I had to buy SB to get Ratbat pisses me off, especially since SB is an expensive recolour.  I would’ve happily forked out the cash for an extra Frenzy/Ratbat pack, or even a recolour of Frenzy/Ravage (to match their blue E-hobby chums) with an extra Ratbat.  So many better ways they could have done this.  So I suspect my review of this toy is biased, my fan boy love for him should counter that a bit, but it’s not enough to feel that buying SB was worth it to get Ratbat.

I’d say that Ratbat is the worst of the Masterpiece cassettes. Don’t do it. Get him separately, or not at all. You’re not missing out on much.
Posted by Tets at 20:23