So coming hot off the heels or wheels of the first one, here is another couple of pages of

My beautiful little boy Cosmos badly narrating a race with his gun flag thing.  I tried really hard to fit some Daytona USA phrases in there, but they just didn't work.  Also, it's no real surprise who wins... so...   Although, thiking about it, does that mean Override has a higher speed stat than Blurr?  Hrm... 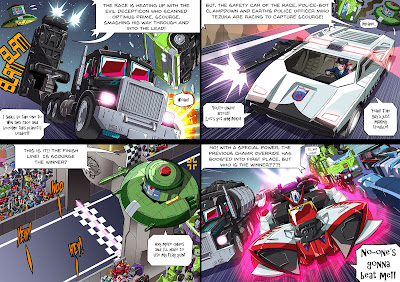 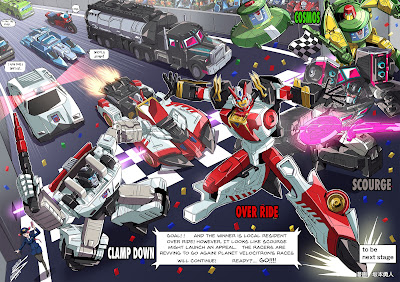 And for posterities sake, the Japanese Versions: 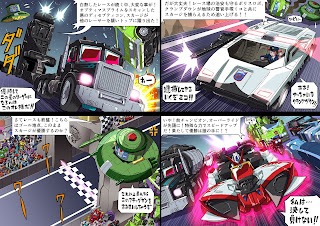 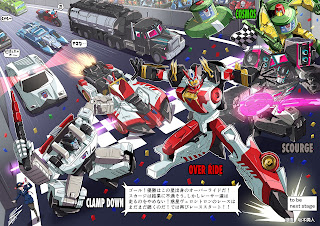 Takaratomy whipped out a little manga to ingratiate the characters of the Velocitron 500 "series" to a Japanese audience(Purely my own speculation), and being the kind hearted fellow I am (also speculation)  and it not being as bat shit crazy as the usual Manga (ahem, I'm looking at you Selects and Legends....) I promptly set about translating it. 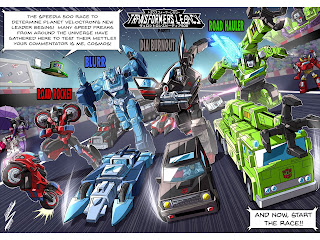 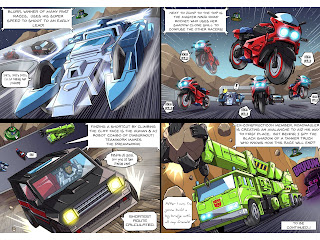 And because the Japanese ones usually disappear after a while, here they are too. 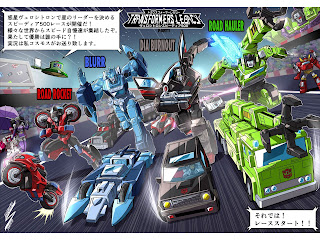 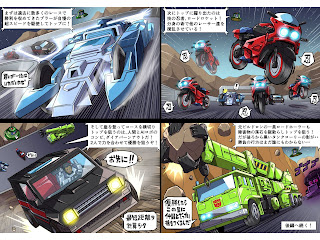 Road Rocket's a chick now hey?  Cute to see Devy peering over the top, wonder how they feel about Roadhauler?
I'd be more inclined to buy the Legacy DiaBurnout if it came with a little person figure, like the Masterpiece version does.

Ahh Mega construx, how you tempt my ways.  I was first introduced to this brand through X-Men, where I got Cyclops and Havok, then Later I found me a Thor, Loki and Captain America.  Old Cap was good enough to be my desk toy for a good number of years.

I later discovered Ninja Turtle versions, and set some friends to the task of hunting them down AND then found out about the He-Man versions too.  My first He-man set was a desperate play for a 5 pack, because it had Scareglow in it. (review on the way sometime).

One day while bored and cruising the net, a dangerous occupation I know, I saw these Masters of the Universe sets on sale on Amazon and with a bit of careful planning, decided to take the plunge. Sigh.

This Cliff Climber set wasn't on special as such, BUT it was only 10 bucks and the Skeletor face glows in the dark.  Perfect!  Having no idea what the hell a Cliff Climber was, would the novelty of a Glow Skeletor face be enough to justify bored frivolity?

Email ThisBlogThis!Share to TwitterShare to FacebookShare to Pinterest
Labels: Other toys, review

Aaand here I am with the second part.  What a cute little story of excitement and redemption and friendship.

Random notes and what not at the end.

Hellloooo ladies and gentlethings, Mr. Sakamoto has been hard at work drawing a new Manga with a bunch of pals and I have been hard at work trying to make it look like an English version of the same comic books.

Well, I have finished and thus I will share it here.  Initially uploaded on Twitter, I messed it up a bit because I despise social networking on the internet.  I have a bunch of accounts I barely touch.  So naturally I made a complete and utter balls up of trying to upload the comic as a "thread" on the twatters.

Random Notes and Ramblings at the end.

Ah foxes, aren't they just the cutest little creatures, with the creepiest little eyeballs?  I love them.  And I found these crazy, but awesome foxes with a hint of Japanese magic and mystical-i-ness.  Check out the video to find out all about them!
Posted by Tets at 15:59 No comments:

Revisiting Tenchu Part 2-A Thoughts on Wrath of Heaven

Good time of day ladies and gentlethings, now that my fun with Shadow Assassins on the PSP has been had, I've ventured back to the Tenchu game I am second-most-familiar with (the first being PS1's Stealth Assassins); Tenchu Wrath of Heaven (WOH). 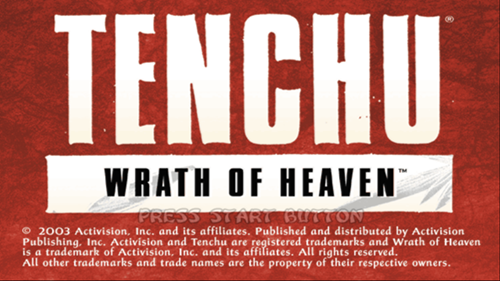 This is another Tenchu game I played a lot of. Quite a lot of in fact.  When I was younger I managed to Grandmaster each level with each character.  I can't remember if I bothered with all three map set ups, unlikely methinks though.

I started this one a while ago and got distracted by the PSP Shadow Assassins, so now I'm back and thought I'd put in and update thoughts, especially since I'm not that close to finishing it.