Never to be opened figures

San Diego Comic Con.  Oh how you torture me.  I saw this set planned for the SDCC a month or so ago and was a happy little jo-jo and sourced one straight away pleased with the thought of having a Legends Deapool for my collection.  It’s not until much later that I realised that these aren’t Legends figures in the 6 inch range, but the ‘Marvel Universe’ figures in the 3.75inch range.

Disappointment and happiness then flew in all at once.

On the minus side, I am still without a 6 inch Deadpool.
On the plus side, I am not at all feeling bad about leaving these guys in package.

Hasbro, being the despotic company they are rarely package items so that one can put them back in the package and make it look relatively like new.  This lot has worked well, since I already have a little Deadpool to play with, I can now look at these guys and leave them in their boxes quite happily, because with this set,
It’s ALL about the Packaging!

This set cleverly comes in a Taco van, as Deadpool loves tacos, not only that (and this is the reason why I wanted this set) the figures themselves come in little taco themed blister packs! 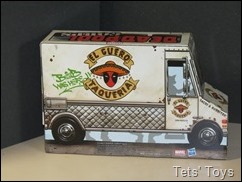 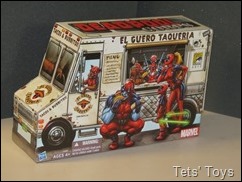 The outer carton looks like a Taco truck.  There are lots of lovely touches on this baby.  Note the shadows under the truck and the shadow in the passenger window, they coincide with the characters on the other side!! 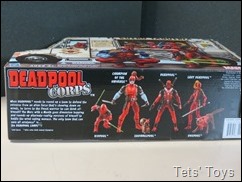 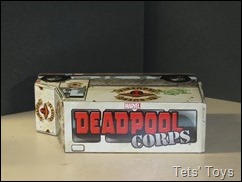 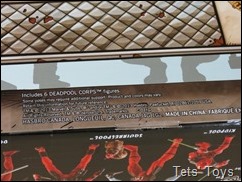 You get most of the members of the Deadpool Corps, which are Deadpool from other Dimensions.  Included in this set are:
Noticeable by his absence is Headpool.  Zombie Deadpool…  Aaaw.
One thing that had me a bit concerned though was this little patch of information on the bottom of the box. 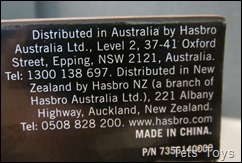 Hmm, I hope this doesn’t get distributed in Australia.  I find it incredibly odd that this is included on an item that is purely for the San Diego Comic Convention, in San Diego, AMERICA.

Especially since this has the SDCC logo plastered on the front of the box.

On the plus side though, this contains 6 figures, so at the Australian B$ Price of Twenty Bull$hit bucks for each figure, it’ll cost at least $120, so I won’t financially out of pocket.  But still, odd to see that printed on an item that seems incredibly unlikely to be sold anywhere else.

Enough about the outside of the box, lets have a look inside hey?

The figures sit in a tray and slide out of the back of the box and the tray has some amusing blurb on the back and side. 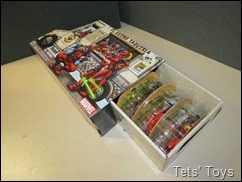 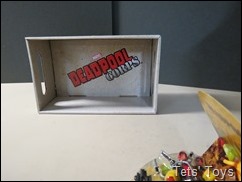 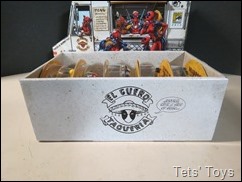 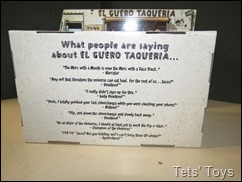 Get the toys out of the tray and they come packaged in little cute taco styled cardboard backings.  Ha ha ha ha, which open up to show the figure. Woooo! CLASSY! 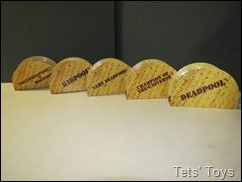 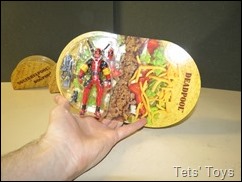 It’s very cute and nice to see that even though the taco print is the same for each one, they have their name printed on it.  Shame that to get to the figure itself, you have to rip the crap out of the packet, as the plastic is glued on to the card.

Now for a closer look at the figures.
First up, Deadpool!

This one looks exactly the same as the Universe release of Deadpool, except for the floaties, which I really like.  He does come with some really cool looking weapons though.    At first I got really excited thinking that the exposed mouth mask was Headpool, but on closer inspection, it has teeth. If I remember correctly, Headpool doesn’t have any teeth, so it’s obviously a head so Deadpool can eat his tacos.  Still, a nice touch and a masked head is included as well.  I guess if you wanted too, you could paint the teeth black and have a Headpool. 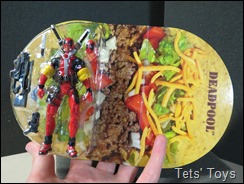 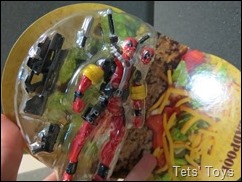 Next on the list, Champion of the Universe, hereby referred to as Championpool. 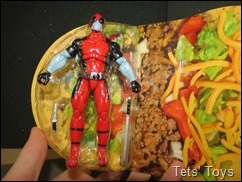 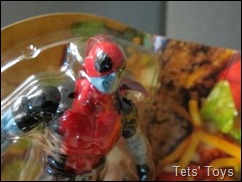 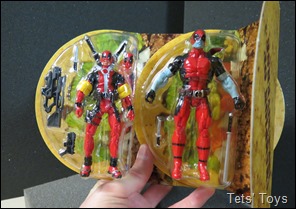 I must admit, I do kind of want to open this one…

So I skip to the next, Lady Deadpool.

Nice big bazooka (the weapon, I am talking about the weapon) and some kind of weird gun thing that looks a bit like a hairdryer.  Interesting to see that Lady ‘Pool has a much simpler designed costume with a simple utility belt and braces around the shoulders.  I haven’t seen any comics with Lady ‘Pool, but I do believe her hair is meant to be blonde, which they messed up here with the caramel colour on this one. 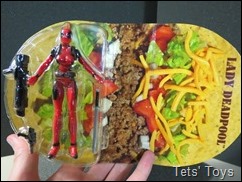 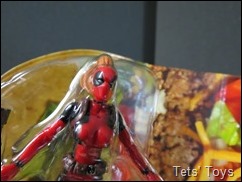 Tempted to open that one as well.

That’s it for the action figures, the others are just static figures.

Next is Kidpool
Nicely sculpted, good logo and I like his eyes and mask area.  Proportions look accurate to how he was drawn.  I was a little annoyed to see that his laser sword  was bent at the tip though… 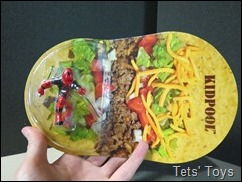 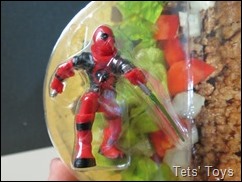 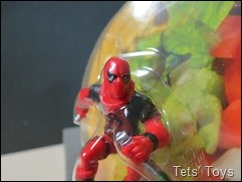 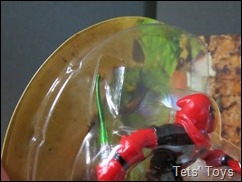 And finally, Dogpool and Squirrelpool.  Again, these guys are static figures.  Oh there is also an inflatable duck-ring as well, which I have seen around Deadpool in some pictures, obviously to go with his floaties.  Squirrelpool looks really good I think, it’s very cute that he has the mask as well as the swords on his back.  Dogpool is nicely detailed and the way he is positioned in the packet looks like all his attention is on the Squirrel (cue Up movie reference here). 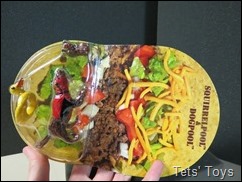 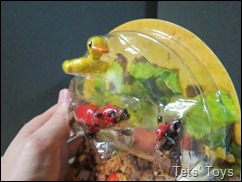 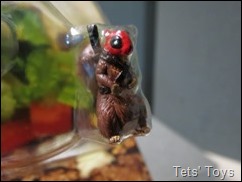 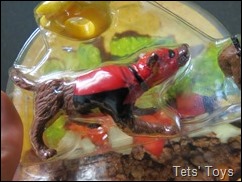 So there we have it.  No figure reviews because as I said before, the small size of these guys doesn’t really interest me that much, but incredibly nice, funny and relevant to the character style of packaging.  It’s nice that you can look at the figures without having to open the box, but it would’ve been nicer if I could have got to the toys without having to destroy their cards.  But oh well, no great loss in my opinion.  I have the general release of Deadpool and while a fun little toy, with a surprising amount of articulated joints, I don’t feel like I am missing out on much by not opening these guys up.  I guess they’ll probably make it to general release one way or another, but even then I doubt I’d go for them.  A Deadpool Corps Legends set however would be an entirely different kettle of fish.

However, even though I have this set and I know Deadpool like Chimichangas and tacos and stuff, I still don’t understand Tacos…
Posted by Tets at 16:00