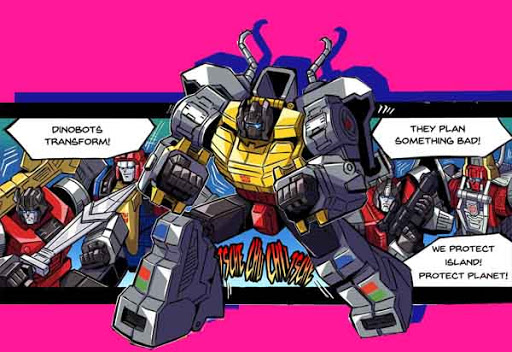 Takara Tomy dropped another Select toy a while ago, and while I personally have no interest in it, I must admit it looks nice.  They also dropped another comic book, continuing the adventures of Star Convoy, King Poseidon, Super(now Omega) Megatron and now Volcanicus!

I have taken the liberty of translating it.

Enjoy!  As usual, my random thoughts theories and ramblings after the comic.

Read them left to right folks ;) My thoughts and ramblings.

Why does Convoy ask how Grimlock got there, he saw Primus open the portal.

Grimlock also seems very aware of where he is and what's going on.  Impressive, unless there was an in-portal movie.

If I remember correctly, Omega Megatron is the extra form of Super Megatron.  Which was added to the Selects toy.  His original powered up for was Ultra Megatron.  So, theoretically, Grimlock's Earth (ours of 2050) should be getting attack by Ultra Megatron, not Omega.(Unless timey-wimey)

Really cool seeing the base guys as part of Neo Scramble city. Omega, Trypticon and Skylynx and the next page has Fort Max and Metroplex!  PG2 also has Ironworks and the Drill head recolour of Sixgun.  A nice blending of similar recent lines.

Box 4, is that Syao Syao and Chip Chase?

The Selectors rebellion; expelling humans from Earth seems extreme although I think it is more metaphorical, as in the Selectors seek total freedom. Their own planet?  Or are they being influenced by Unicron through their connection with Angolmois?

Interesting to see Nightbird there, as one who became evilly sentient after their adventure. Minus Angolmois at the time though

Convoy and Roller driving side by side. Cute.

Does Convoy store his cape in his trailer?  His trailer is no longer a battle base, its his wardrobe!  That's why Roller is free!

Dr. Hitotonari (literally means "person next to one" i.e nighbour) can't get away from arm labels.

Convoy looking visibly embarrassed at the using selectors comment.  Must  be weird having sentient robots as walls and floors.  The walls have ears... literally.  I goes you could remodel your house whenever you wanted.  But no privacy.  Too bad for the toilet Selector....

Page 4 looks really good.  It was fun to edit.

Slash doesn't use particles like the other Dinobots, but Grimmaster speaks smoothly.  She also has a slight accent. And is a pet?

The Japanese for the erupting explosion, just has "do do do do", (rapid explosion) effects.  I wanted some way to make the erupting feel epic, rather than just boom boom boom (take you up to my room....) so went with what I went with.

I translated all the effects, but really had to resist the temptation to add a "Boop" where the Quintesson presses the button for the recreator.

These 5 pages made me appreciate clouds and how nice they have come out in this comic.

For the second half of the comic, Grimlock swaps from calling the Quintesssons "Quintessa Aliens" to just Quintessa.  Really the Quintessa aliens is just saying a being from Quintessa, so I just called them Quintessons.

The Recreator is a pretty awesome piece of kit.

I really enjoyed the dynamic look of this part.  It was a total prick doing the effects editing though.

Grimmaster gets a bit mashed up. My opinion? Later we'll see him reformatted into a new new body, like we saw with the two teams of Seacons.

Also, what are the other Dinobots doing that allows Predaking the chance to grab Slash?  They're all watching Grimlock to the fighting, and suddenly just let Predaking nab Slash? Lazy ass-hats!

Combination Matrix has now had the term Energon added to it. FFS.... IS it a new one? WTH?

I kind of wish Volcanicus has a K in there somewhere.

What's Convoy doing while all this revolting is happening?  How long was Volcanicus fighting Predaking? So many questions!

Spike recognises Grimlock's voice over the comms, so Volcanicus obviously has Grimlcok's voice.  I guess Grimbo is in total control and just adopts a new name.

Also, the radio for Volcanicus comes out of Slag's legs!

The  world is in danger. Is a literal translation.

I like the symmetry in this page, through the panel set up, especially the Convoy Vs Megatron panel.

In the Japanese, When Grimbo leaves the island to slash, she actually says English OK.  Obviously a hip young lass, I made her acceptance of this command in Japanese.

More awkward sweating from Convoy as he and Megatron talk.

Where does Megatron store his cape?

Overall I enjoyed this one quite a bit.  I thought the art was really nice in this one! Can't wait for some more.

Also, me previous theory of The Oracle being an impostor...  Is being rethought.  It's kind of hard to rpedict how this story is going.  Maybe the Oracle (primus) needs to gather as much Angolmois energy for something, against Primacron's wishes.

ALso the Vok and their experiment reset thing is in the background as well.

Who are out big players in this story?

The Quintessons (or are they).

Personally I quite like this little bit below by my partner in crime and proof-reader, Ark-Ivor:

Yup, a lot of Timey-wimey indeed.

What do you guys think?