I’d been looking forward to this guy for a while and after I finally had him in hand, I was not disappointed.

He arrived one overcast morning and I trekked out to pick him up from my loyal Post office..  Realising it’d be a big box, I had come armed with a trolley.  He’s not that heavy, but very very bulky. 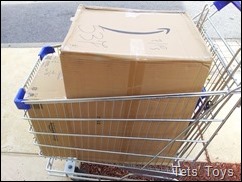 I pushed him all the way to work and dragged him to my area, and left him there for a while as I got busy with work stuff.  Lunch came eventually and I got a-crackalacking on cracking that box open!!  As typical of Amazon packaging it was light on the padding.  But the box was huge and managed to protect Metroplex’s box well enough.

Then I pulled it out. 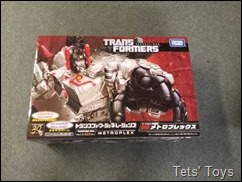 My first thought, wow, what a HUGE box!  It’s great!  I need to get some size comparison shots!! 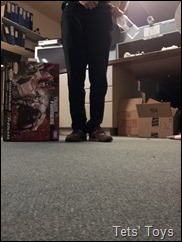 Now wanting to see the toy in the flesh, I popped the seal on that box and slid out the inner figure.

It it was joyous!  So huge!  So much plastic goodness!  And two guns.!!!  MWA HA HA HA!  I thought the cardboard inner that held Metroplex in place seemed a little flimsy, and it is.  But it did keep the weight of the box down, so no major complaints about that.  Being at work, I didn’t have time to get much further, so this is as far as I got! 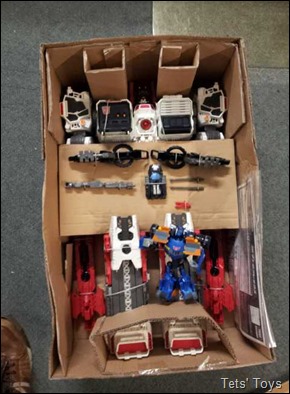 Determined to enjoy the proper opening of Metro, I duly took him home.


And left him on the floor until the next day!


The next day crept along and once again, I was at home.  So with the TV providing no means of entertainment tonight, I thought that I should sit down and take him out to check him out.

However, having a look at the back, it would seem I had some troubles to overcome. 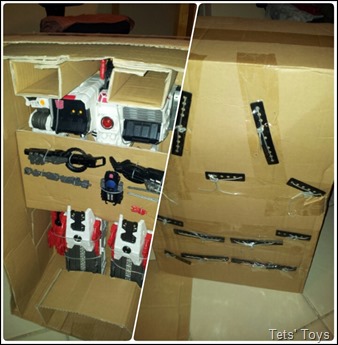 Yes, that old enemy of people who open their toys!
TWIST TIES!!
I had flashbacks to the time when I opened my RID Fortress Maximus.  I am pretty certain it took me about 30 minutes to undo all the twist ties on him…

Therefore, I got prepared. 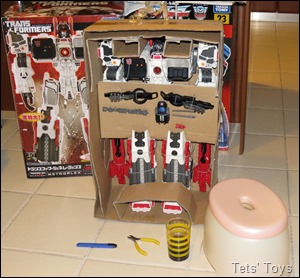 First thing I decided to do would be to free the wire, as it can be handy at times.  So on the back of the box, I got to work.  Using the carton knife to cut the sticky tape and the wire clippers to cut off the knots.  I really couldn’t be bothered untwisting them all.


Although apparently these guys weren’t going to be that hard.  This one was so loose, I doubt it was holding Metroplex in place at all.  You could say, it was a SLACKer… 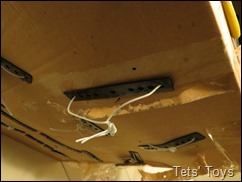 Bad Puns aside I duly got clipping and this was the result. 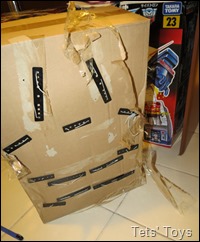 After that I pulled them all off the front and freed his weapons too.  YAY.  this was the result of that! 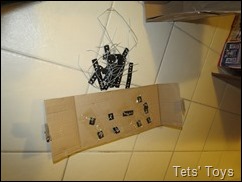 Then Pulling the little sexy man out of the box, OH GAWD!  It was magnificent!

Madly running around the house for batteries, I discovered my usual spot for photo taking probably wouldn’t quite cut it this time. 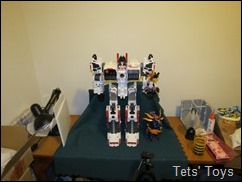 So I passed on that, especially since I haven’t applied his stickers yet.  But I did mess about with his electronics.  He has a bunch of phrases and sounds that sound like they are from Fall Of Cybertron and are pretty cool.  Another neat gimmick is that his eyes light up and you can make his EYES look left and right via a little lever on the back of his head.  Much like the Gurren Lagaan figure I reviewed a while back. 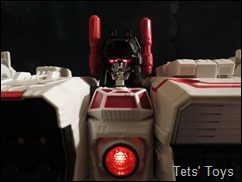 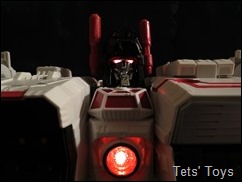 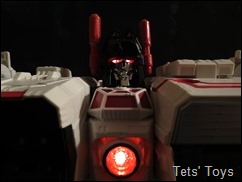 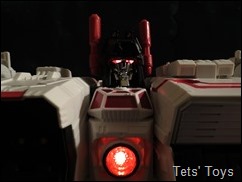 And that was it, I proceeded to mess about with the sounds and just generally enjoy the enormity of this guy.  It was marvellous!  Transformation occurred the next day.  No pictures of that though.

I did go and make a little video of the sound chip.  Here we go!

I wish that they had put a better LED setup in there.  It seems that whenever there is lights in the eyes (as opposed to just light piping)for Transformers they have the eyes flash on and off.  Why not have them stay on?  Or better yet pulse or change colour?  I have seen some great LED lighting stuff going on.  Check out some videos of Chogokin Yamato as an example, the Wave motion cannon (or hadohou) has at least three colours, which is will fade and pulse and cycle through and it looks fantastic.  I think at the very least for Metroplex they should have had the eyes stay lit instead of flashing the same timing for each phrase.
Posted by Tets at 23:34