Super Mario and Luigi (why doesn’t he ever get called Super Luigi?  After all the title is Super Mario Bros. not Super Mario.) always seem to nab new powers in their games.  Mario galaxy gave us bee Mario, Galaxy 2, cloud Mario, Mario World, Raccoon/Tanuki Mario and the list goes on.  I think I found a new one.

Super Balloon powers!  Cool, that could be quite interesting methinks. 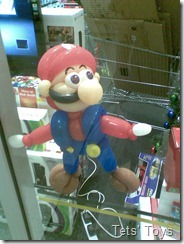 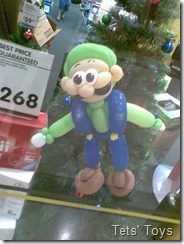 I found these guys stuck to the window of a shop somewhere, can’t remember where anymore, as it was before Christmas and that was a whole week ago,  but I was mightily impressed.  That’s some pretty good renditions of Mario and Luigi in balloon form!

I wonder if they were Nintendo merch or someone made them themselves.  If they aren’t Nintendo merch, then the balloon maker is pretty skilled!  Nintendo, don’t worry, they were being used to flog Mario Kart Wii and Galaxy 2 I believe as the shop did sell Nintendo Wii games.
Posted by Tets at 01:47