Perceptor Of Reveal The Shield fame.

Finally an update of ye olde Perceptor.  He hasn't had much love since the days of G1.  Yet at the end of the Revenge of the Fallen line we were graced with a few G1 inspired fellows.  Although theoretically they were part of the movie line.  Luckily these guys from the short run “Reveal The Shield” fits in better with the Generations line of figures, which I think was running at the same time, or so close that they felt like the same line.  The main ‘gimmick’ of this line was that they featured the classic old Rub Sign from days of yore (or G1 as it were).  Others in the line were Jazz, Wreck-Gar, Windcharger and Lugnuts.  They were all pretty good toys.

Surprisingly good and in an odd change of events, sporting some lovely Chromey bits that his Japanese counterpart did not. What? 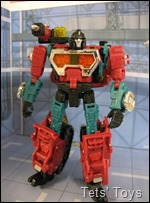 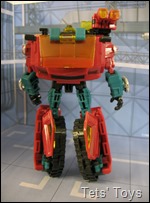 He looks like a very nice update to his old self.  All the colours are accounted for and even though he doesn’t transform into a microscope anymore, he does change into a research truck, which is probably a bit more understandable, well without ridiculous mass shifting shenanigans.

He even has chrome circles on the side of his fore-arms which are completely superfluous.  They don’t go anywhere or do anything for vehicle mode, they just find a little nice underneath the bonnet and sit there.  A nice touch that I would have missed had they been left out. 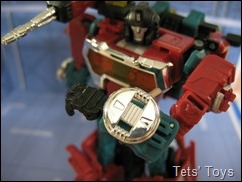 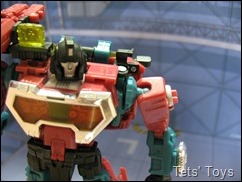 His chest piece is also chrome rimmed, as his his, um, blaster thing on his shoulder.  Very nice, we haven’t seen a toy with this much chrome in a while.  And we probably won’t see one for a while (and haven’t).

In his chest is a rub sign and it is cleverly hidden behind his chest panel and in a nice lovely very cool throwback to his Gewunny-ness, the chest plate flips down, so you can get to rubbing that sign. OH YEAH. 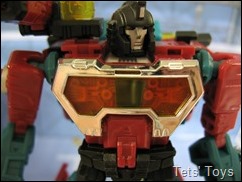 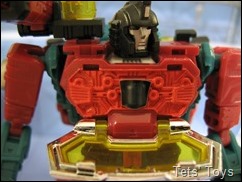 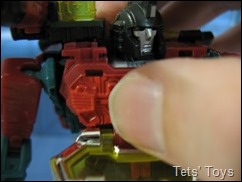 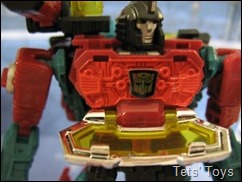 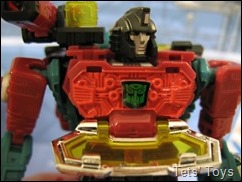 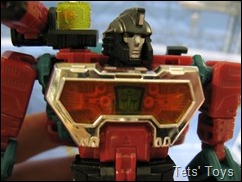 As you can see there is some very nice detail hidden behind the transparent plastic.  And he can put stuff on the plate when it’s open, for investigatin’ of course!!! 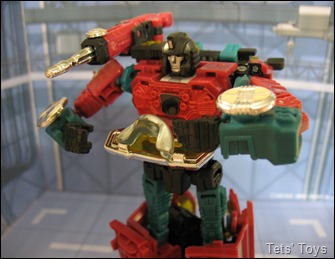 He’s got lots of lovely articulated joints scattered all over his limbs and they are generally clear of any inhibitants.  Biceps swivels, adaptable elbows and skinny thighs add to his sexiness.  The bulk of his vehicle is kept on his backpack and lower legs.  I think this works out ok for me, even though mine has slightly loose knees. 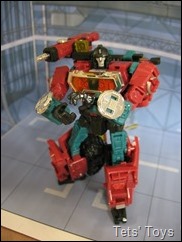 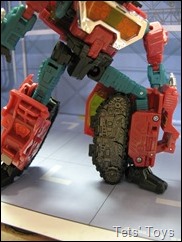 His arms can make him clap, reach to his chest plate thing and also to his shoulder gun thing.  Nicely adaptable.  The shoulder gun can be unfolded to be the missile, or you can leave it as the light as that is how it cleverly hides in vehicle mode. 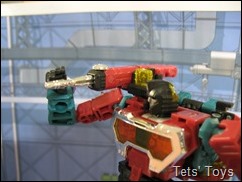 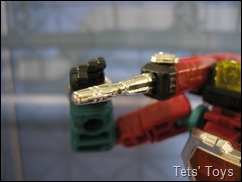 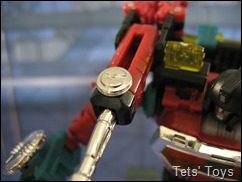 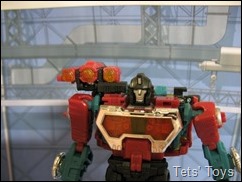 One bad thing about his shoulders though is the blue parts that the arms are connected to don’t lock into the torso anywhere, so they freely float around…  WHY?  I hate this soooo much! 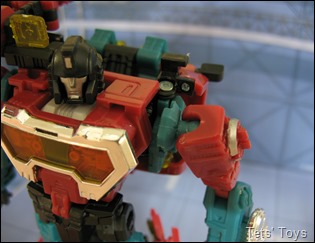 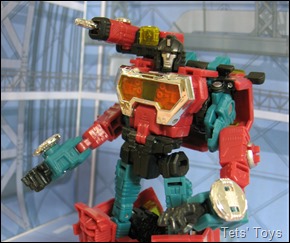 So pretty much anytime you try to move his arms, his shoulders will rotate out from where they should be.  Unimpressed at this I will say…  Oddly he also has an aiming receptacle mounted on his…  shoulder gun.  Where he will never get his face. Ooookkkkaaaayyyy…  Still it does look nice.

He does have a nice face sculpt though and even though he has yellow plastic in the eyes it looks like they have been painted over  with…. 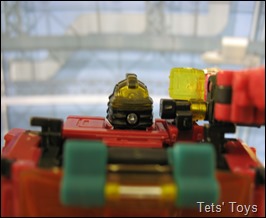 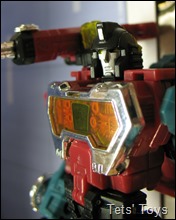 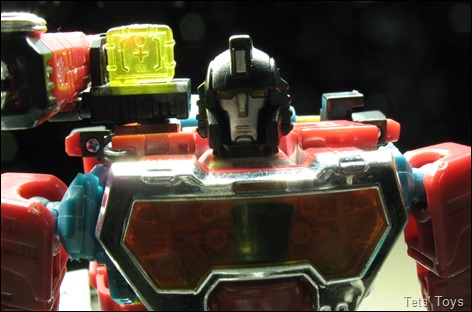 Thereby destroying any light pipability.  Still I guess it means his eyes are easily noticeable most of the time.  He has been given a mouth, which is absent on the G1 toy, despite what the cartoon showed us.

Transformation is initially a little complex looking, but after messing about with it a couple of times, you get the hang of it.  The legs are a little fiddley and I find getting the arms to fold into that sweet spot for best fit a little hard to find sometimes, but it is a satisfying transformation, without being frustrating or simple.

His vehicle mode is a science-y looking research vehicle, the type you’d expect to see in the Arctic/Antarctic as  it has treads on the rear and wheel on the front.  I think it’s a good choice, despite general impracticality.  This is a specialised vehicle…

He has a nice little license plate (I am unsure if there is any meaning to it), some nice bronze on the mechanical bits of the treads and rims of wheels and silver rear windows.  The headlights are a nice orange plastic.  And some paint for the grill.  The clear windows, I am not too sure if I like or not to be honest.  I also dig the roof mounted spot lights a lot! 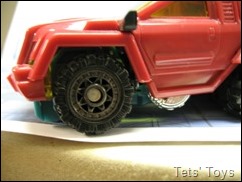 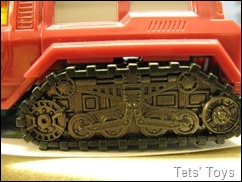 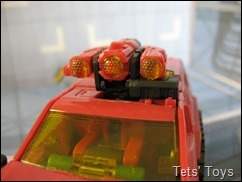 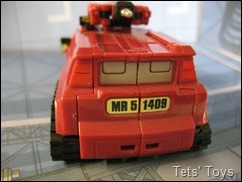 The light can be rotated around, or if you would like to have him as an action-vehicle, you can transform the light into the gun quite easily.  Underneath the vehicle, the robot parts stick out like arms on a car but the car does have some nice additional sculpted parts for pleasing the eye. 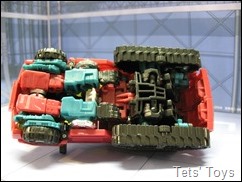 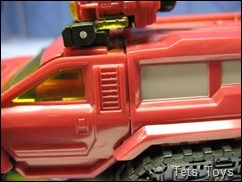 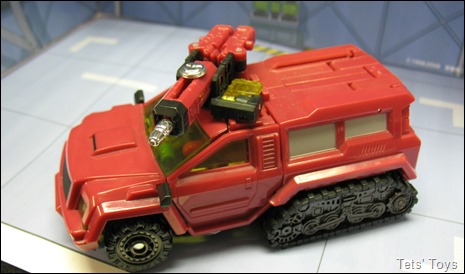 I quite like this figure.  It ticks my required Perceptor boxes, Chrome, red, shoulder thing and science related alternate mode.  The bonus is that it has a fairly sturdy robot mode and pleasing transformation.  It is well worth adding to your collection if you are looking for some good contemporary companions for the modern take on classic Transformers that the Classics, Generations and Reveal the Shield line seem to be aiming for.

This guy has been recently repainted as Magnificus, one of my favourite G1 off-shoot characters, and sadly  missed the deadline…  Hopefully they didn’t sell out of the preorder and I can get one on release.  *Crosses fingers*