So, random packed lego-like figures are becoming pretty popular.  Megablocks seemed to have come up with a line of Marvel characters.  I hadn’t seen any sets or anything to go with them, but being fond of little lego type chaps, I had to check out the Megablock Marvels.

I saw these in a shop and they were $2 a pop.  Not too shabby so on a whim I bought 2.  Once again, random packed, I just hoped that I hadn’t bought two of the same.  In a cool little twist of fate, I managed to get of the ones I was hoping for, and another.  I say another as if it is a bad thing, but I am pretty pleased with both of them, as I now have the Summers Brothers Cyclops and Havok.

I opened up Cyclops first and he was the main one I wanted.  They come in a baggy and are broken into their component parts, well, limbs anyway.  After assembling him, I came to the conclusion that for $2 and their size, they are quite good fun. 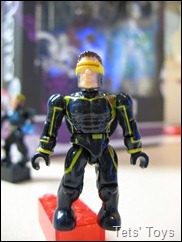 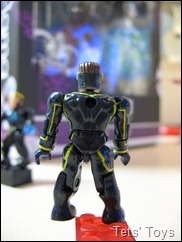 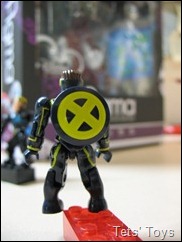 Cyclops comes in a uniform that I am unfamiliar with.  Not surprising since I haven’t touched an Xmen Comic since the days of the Onslaught saga.  It looks Cyclopsy enough for me to know it’s him though, so that’s cool.  I am not sure why he comes with a large shield though.  Some Capt America crossover perhaps?  I assume it’s just to avoid having to make an accessory for his optic blast.  Still it looks ok, can be left off if you like and also slapped on his back.

It seems that they use the same base body for all the figures, make a new head and add accessories as required.  Obviously there are the occasional changes, the series that has Cyclops and Havok, also had an Ironman, Magneto who had different bodies.

Articulation wise they are very good.  The arms, head and legs are joined onto the body with ball joints but are hindered slightly by the body’s sculpting, elbows and knees are both hinges and the wrists have swivels.  Not to shabby for such a little guy.  You also get a little block of lego type plastic for them to stand on as well.

From certain angles, the head looks a bit weird and too large for the body, but aside from that, it’s a pretty good little sculpt. 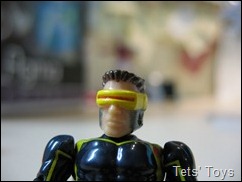 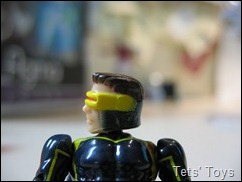 Posing is easy to do and the wide feet allow for good balancing even when not plugged into a base piece of lego.  Oh Sorry, Megablock. 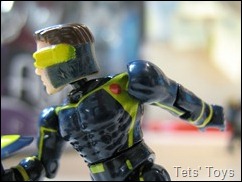 The paint work I found surprisingly good.  The lines are all crisp with no smudging that I have noticed and they have included nice details, such as Cyclops’ little red mark. 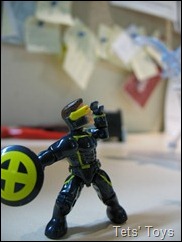 It is possible to pull off classic poses, although the arm doesn’t quite get close enough to the head to touch it 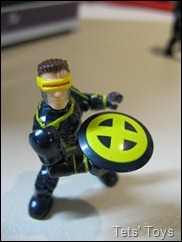 Havok is just as well articulated and made.  He doesn’t have a shield though… 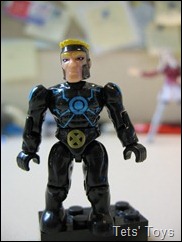 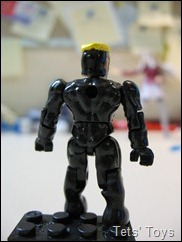 He does have nicer paint though!!

His head is done well and could be easily used for Gambit too! 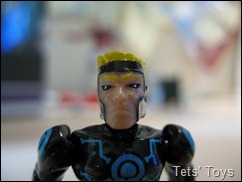 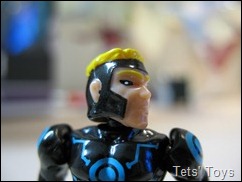 They have some light finger sculpting and I really like Havok’s costume!! 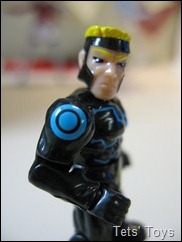 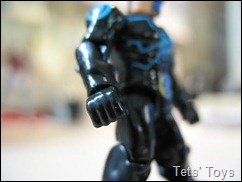 Havok’s accessories are some blue flames.  Umm, I never really knew much about Havok, except he was a jealous younger brother type dude.  His power?  I have a vague feeling, there was something about him throwing circles (as it was drawn) but I can’t remember what they were or did.  Might have to zip back to the Age of Apocalypse comic I have and see now…  All I know is that Cyclops and Havok’s powers won’t harm the other. 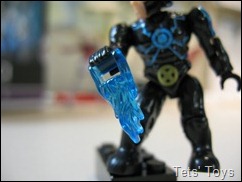 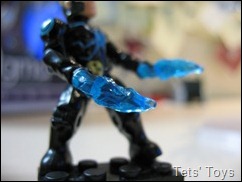 I am assuming by his name that he has trouble with his powers, so since the flames have a flick up, you can have one going up and the other down to make them look less controlled.  I quite like them. 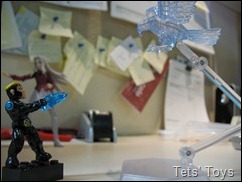 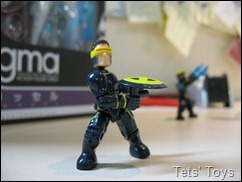 Watch out Scott and Alex!! there is a giantess after you with her evil bird of prey! 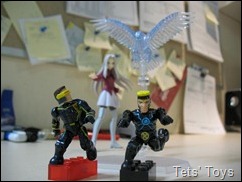 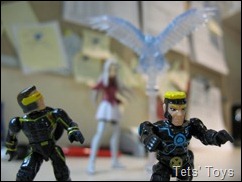 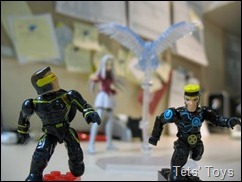 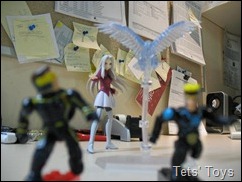 BLAST IT BLAST IT!! 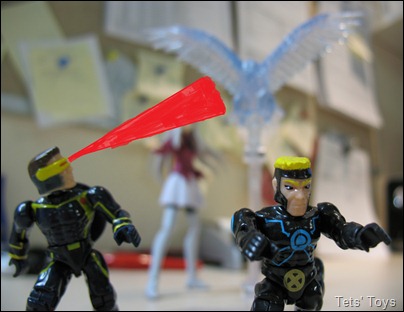 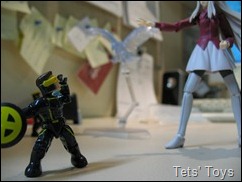 I’ll Teach YOU to mess with an X-Man Mega-wench!! 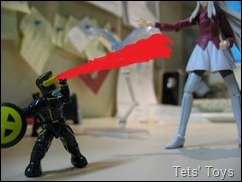 Yay, Team Summers banded together and won the day! Woot! 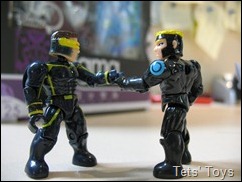 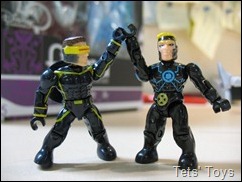 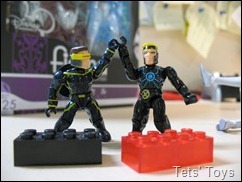 Aaaah, that was fun!  I really like these guys.  I had a look at the catalogue that came with them and there were Thor and Loki (Cute!!) Wolverine and a bunch of others.  Might actually get online and see how many series there are.  Cyclops and Havok are series 2.  I’d really like a Deadpool now!  And for $2 each, well worth it.  I think I got my money’s worth!

Oh and here’s a scan of the little brochure that came with them.  I wanna see some more waves now!! (Note the colour codes for the levels of ‘rareness.’) 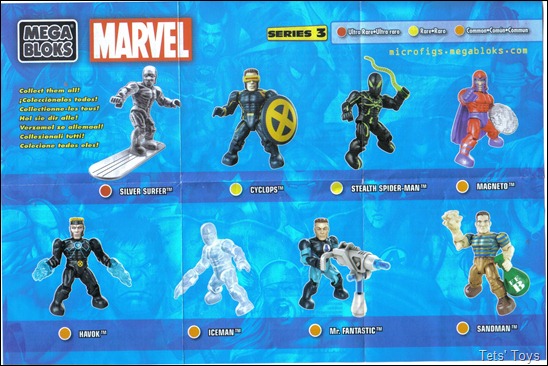 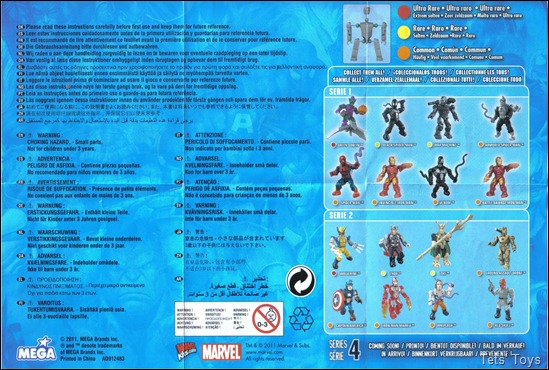 Email ThisBlogThis!Share to TwitterShare to FacebookShare to Pinterest
Labels: gallery, Other toys, review