So I finally have my new face for Metalhawk, actually, I don’t know why I used finally. After I emailed funpub in regards to the face I received before, they sent it out pretty much right away and I had it within a week or two at most.  Cheers guys.  Thus I now have  the final review I will do for the Botocn 2012 (Mainly because I don’t feel the need to hunt down the attendee figures at all this year), the leader of the Autobots on the Skyhammer over Japan, Metalhawk.

Metalhawk was a Pretender back in the day.  I know a lot of people dislike Pretenders as the robot is usually sacrificed so that they fit inside their monster/human shell.  I have a soft spot for them, as you kind of get two figures and their rubbishy look is cheesy and baffles the mind as to what vehicle they are sometimes.  Now he doesn’t have a Pretender shell, but he still manages to covey the organic feel of Pretenders.

So how does a shell-less Pretender rate?

When I heard this character was announced, I knew exactly which toy they’d have to use.  Sure enough, they went for it too.  Only one choice really, and it’s the Universe version of Thunderwing, who was a Pretender as well.  It actually works fairly well as Metalhawk’s inner robot transformed into a jet, just as Thunderwing’s Pretender shell does as well.  The colours match well and the head has been made into a decent sculpt. 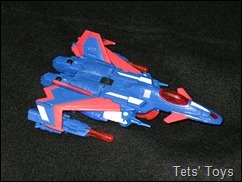 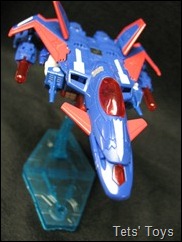 The jet mode works well for Metalhawk.  The original toy was a ‘future jet’ of sorts, which is how the a lot of the Japanese toys use ‘future’ to define an odd looking vehicle mode that doesn't quite look like a normal vehicle.

There is a nice bit of sculpted detail on the jet that catches the eye and makes it a bit more exciting.  If you look carefully enough into the cock pit, you can see a little chair inside.  Nice for Metalhawk, but begs the question, “Why does Thunderwing need a cockpit?” 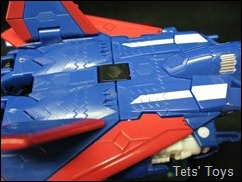 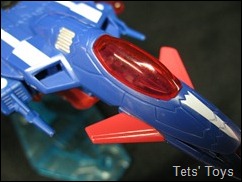 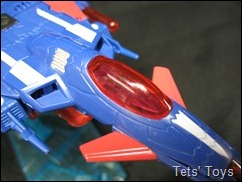 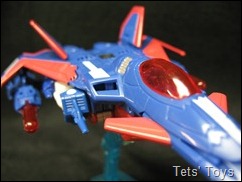 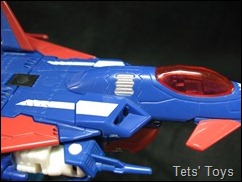 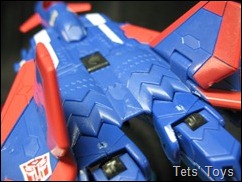 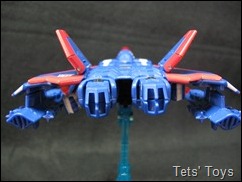 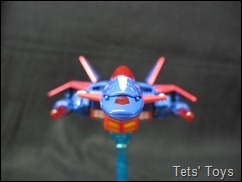 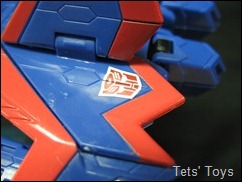 He has the same weapons that Thunderwing has and that is no bad thing really.  They are massive looking missile launcher things with a plastic missile in the front.  They still have the springs loaded in them.  They can be mounted underneath the wings and they have faux missiles sculpted on the side of the guns to help them looks like a missile pay-load. 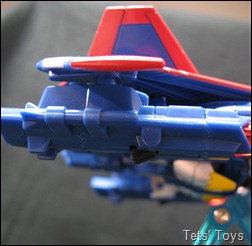 It’s a nice enough looking jet from the top, but sadly with this type of toy, due to the different aesthetics of the robot (i.e organic style), if you look underneath, you can see the robot parts under the plane.  But still, it manages to cover the head up well at the very least.  The arms, well they just hang off the side and the legs fold into the chest.  The landing gear does flip up nicely into the body I will add. 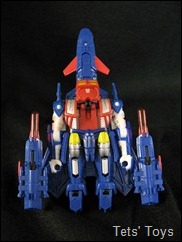 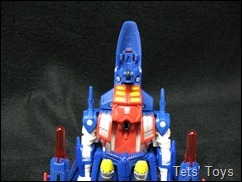 The nose of the jet can detach as a small drone helper.  It is quite cute and a nice touch.  Again, it’s a carry-over from Thunderwing.  Metalhawk had no such ability before.  The best part is, from the top the jet still manages to look complete. 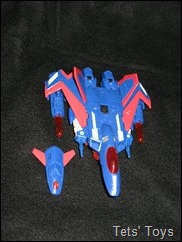 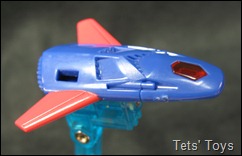 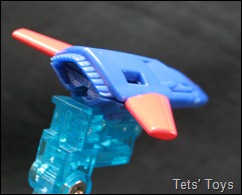 Now let’s have a little look-see at the robot mode! 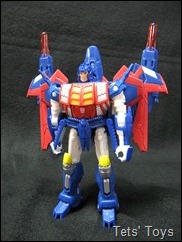 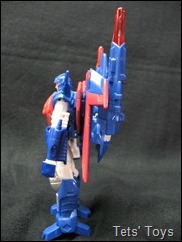 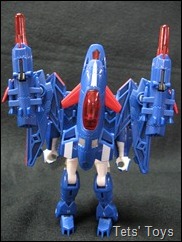 I think that TFCC have done a pretty good job with Metalhawk here.  Realistically they could have chosen to copy his inner robot mode someway, which changed into the jet, or go for the Pretender shell look, which they went for.  With the bonus of him having the jet.  Although I do like this toy, I find it a bit odd that we have essentially his shell being the main body.  The reason why he still has a human face wasn’t touched on in the comic that came with and his bio just states that her is a human-Transformer liaison guy.  The only thing I could think of that justifies the human face, is that he is still a Pretender and he spends all his time inside the shell.  Although that seems a bit odd, since all the Head/Target/Powermasters (from the same era) we have come across before have generally been detached from their partners.  Metalhawk and Octopunch are the first Pretenders we have see, and only Octopunch seems to retail his shell.

All that aside though, I think they have done a good job combining the colours and look of his shell to this toy.  The face is sculpted fairly well, although the shape leaves it prone to mis-painting issues.  Now that I have swapped over his face with a new one, it looks a LOT better.  But even though this was sent to replace my original badly painted face, this one isn’t prefect either.  One side looks really good, the other one looks ok, but it is still cocked up a little bit. 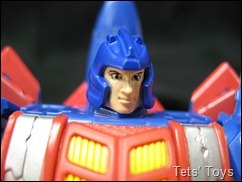 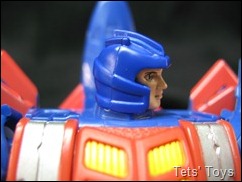 The helmet looks pretty cool.  Have a look a little bit in his right eye in that first picture, what a wonky eye! 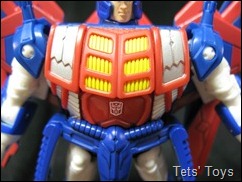 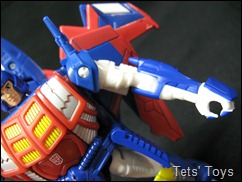 The chest looks really good and he has a tiny little Autobot symbol on his abs.  The arms and hands also look nice as well.  He does paint his fingernails though.

The legs are decent enough, but this is where I have the most problems with this toy.  The thighs fold up into the chest for jet mode, but when in robot mode, there is nothing to lock them down, so they are just floating around.  It’s annoying as when you go to move the legs, the chest usually pops up as well.  Plus I don’t really like the way the feet look with the triangle nature.  It would be nice if they actually sat flat on the ground, but they don’t. 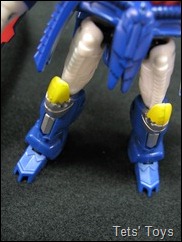 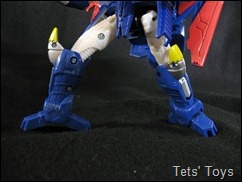 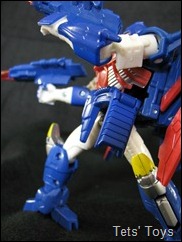 Aside from issues with the design though, the colours all work pretty well and he definitely looks the part.

Oh and now I have him in robot mode, the gun can be equipped a couple of ways. 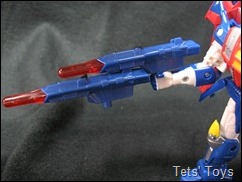 My personal favourite, the BFG.  One gun can clip underneath the other and it can be held from the back gun, or the front.  If held from the front one though, it needs to extend a bit out to the side. 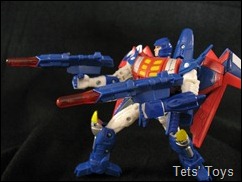 Dual wielding, the way to go when auditioning for a part in a John Woo film.  Either way looks pretty cool.  They can also be left on his wings. 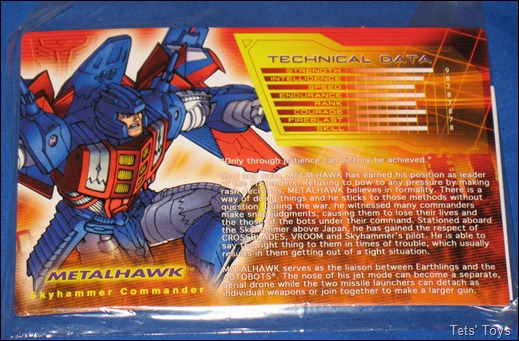 It’s an entry into my Badly Written Bios category for Metalhawk here I’m afraid.  Commas galore.  Listed as the “Skyhammer Commander” it feels like he is in the same rank as Han Solo.  Just some captain of a ship.  I did laugh at “…he has gained the respect of Crossblades, Vroom and Skyhammer’s pilot.”  Doesn’t the pilot warrant a name?  I am surprised they didn’t even choose some random Pretender to be the pilot.

Just as a little side note;  If Metalhawk believes that there is a ‘certain way to do things’  and never deviate from doing them, that would make him a predictable leader.  Therefore, allowing Gigatron to plan a strategy that forces Metalhawk to make a decision that he’s done before and was thus predicted by Gigatron.  After all they have been fighting for a long time by the looks of things and must have an idea of how the other thinks.  This would make Metalhawk a bad choice for a leader.

I think TFCC should have kept up with the ‘avoiding rash decisions’ theme by just stating that Metalhawk thoroughly assesses and carefully considers a situation before acting.  That way they can keep the ‘formality’ ideal obviously an apparent ‘Japanese trait,’ (I am rolling my eyes right now… at least they dropped the titles they had in the preview pages which had Metalhawk calling Gigatron as Emperor Gigatron.  Quite respectful to an enemy…) and still have him being a successful and intelligent leader, as warranted for one such as Metalhawk.

So aside from the (usual) awfully written bio and flaws of the mould that affect this toy, Metalhawk is a pretty good little effort.  The face is a nice touch and the colours work well on the body, thereby conveying the desired notion that this is Metalhawk.  A sturdy effort.

But I don’t really think it is incredibly awesome.  As part of the set it’s nice enough, but I wouldn’t really be bothered to hunt it down.  Pretty much like every other member of this year’s set. None of them are ‘must have’ Transformers.   It’s definitely not the worst, but it isn't the best either.  I would have to say, that Magnus is my favourite, followed by Soundwave and then Tracks, Metalhawk, Treadshot and finally Gigatron.

Now that I have finished the final guy, I think he fits in fairly well with the rest of this set (not a compliment).  By that, I mean it’s neither here nor there.  None of the 5 from this set are really worth hunting down and some of them are definitely worth avoiding altogether.  Metalhawk in particular is a worthy attempt, but it really doesn’t light my fire of toy love, which I suspect is due to the base toy they used.  As cool as the toys is as Thunderwing, it really isn’t that great a toy.  At least it is less dousing than Gigatron though.  From what I have seen from the attendee figs as well, this whole set is just sad and lost, looking for some inspiration.