Wildrider, the last of the Stunticons to be typed up for my blog.  I never quite dug Wildrider when he was kicking it with his G1 fellows.  Not too sure why.  I should really as I did end up with him somehow and his personality, like his name, is completely crazy, much like my favourite Battlecharger Runamuck (who is part of next years TFCC figures!!).  They would probably go together quite nicely really.  Hmmm.


Wildrider would be the second mould I haven’t had a good look at really.  The first being Deadend (Jazz).  Wildrider is a reuse of the rather cool Lockdown body from the Animated show.  One of my favourite moulds and characters from that series and voiced by Lance Henrikson (Aliens’ Bishop folks!!).  Lockdown was cleverly engineered, being a deluxe sized toy that managed to Transform into a figure the same height as most of the Voyager sized Decepticons.  I think it’s appropriate that Wildrider, being second in command, well as second in command as any one of the Stunticons could be under Motormaster uses this mould. 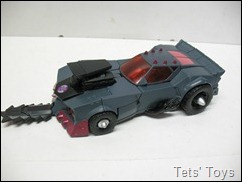 They used the ‘Blazing Lockdown’ body with this guy, which means he come equipped with a chainsaw.  The thing I disliked about the Blazing version, was there was nowhere to store the chainsaw.  It either went to the nether-realm with G1 Optimus’ trailer, or hung under the vehicle mode.  AS you can see the car is a type of monster car, with some Mad Max-esque look to it.  I love that vehicle mode.  From the front it looks sooo angry! 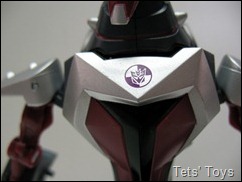 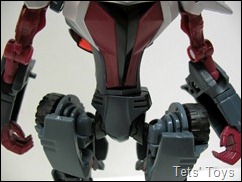 The robot mode has some simple colours, grey, black, purple and some rather nice looking silver paint.  It is also articulated remarkably well.

He also comes with a new head. 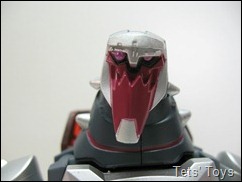 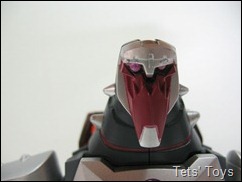 Nice and squinty the guy is a little bit crazy and is the demolitions expert and show director in the comic.  I like his face and it matches the feel for the figure really well.  It is articulated, but due to his thick neck, looks off at an angle if turned left and right. 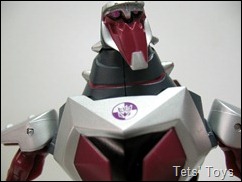 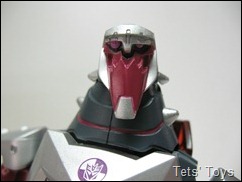 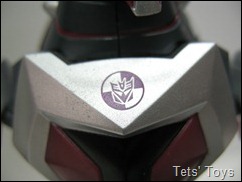 My one has some very loose arm joints, but nothing I can’t fix and I will have to as they can’t hold up his weapon very well.  Rather annoyingly, they haven’t fixed his deformed hands which point annoyingly inwards.  This is the fourth use of the body (LD, Stealth LD, Blazing LD, Wildrider) and they still haven’t fixed it. Grrrrrrrr! 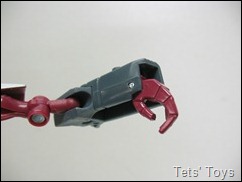 Wildrider still has the engine weapon.  I am not too sure if it is an EMP anymore, probably not, but hey it still works the same way as Lockdown’s does, which involves putting the hood over his fore-arm and plugging the gun into the hood piece, which incidentally is how the chainsaw is attached. 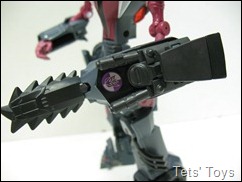 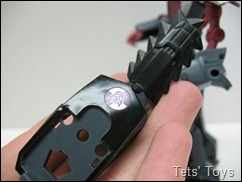 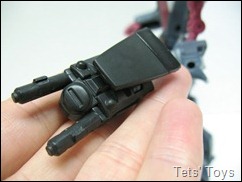 Speaking of the hood piece though, beware how you put it on.  I went to slap mine on and the first time, it wouldn’t fit, so I applied more pressure and the result was not what I wanted… 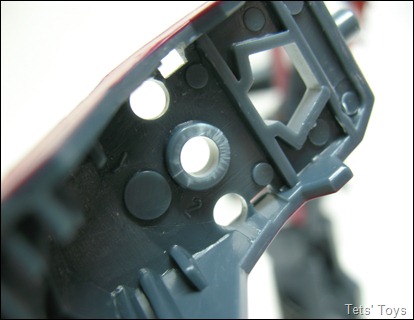 Lots of horrible stress marks all around the blasted hole.  Not terribly impressed with that.

When I got my Blazing LD, I did manage to improvise.  I have the body stashed in a box somewhere, and my normal LD has the chainsaw and bits.  When not needing the chainsaw, the bonnet can be stored behind his back, and it kind of looks like some coat tails. 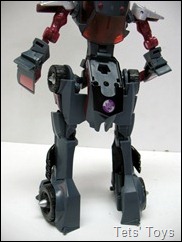 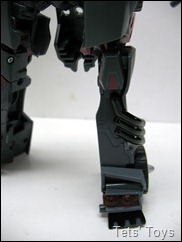 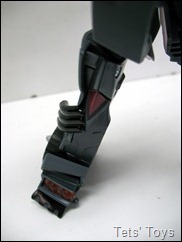 Also a shot of his legs.  LD had different paint to highlight his asymmetrical body, as he was supposed to have acquired various upgrades for himself.  they have managed to cover this up fairly well for Wildrider by just painting in the same spots on both legs. 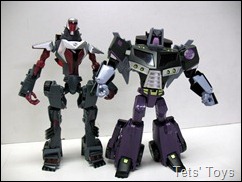 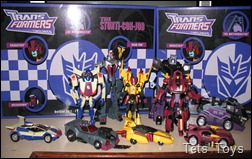 As you can see, he towers above the other deluxe class figures. 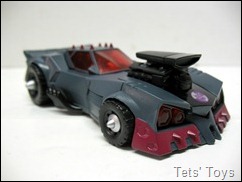 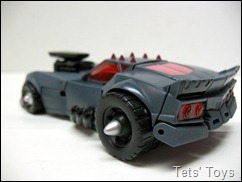 It reminds me of the Futurama episode where Bender becomes the Were-car.  It looks so mean with the red lights, spikes on the front bumper and large engine and hood. 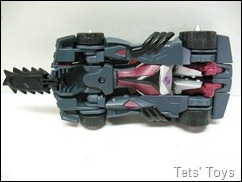 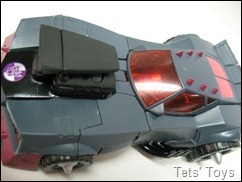 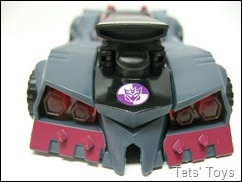 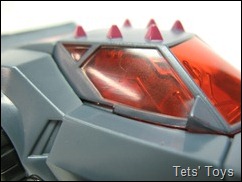 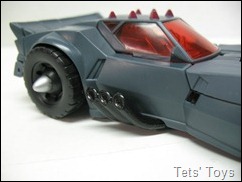 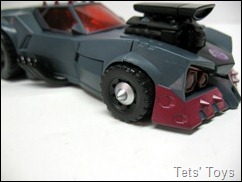 The robot mode is hidden pretty well when looking at the underside of the car, the windows have a little bit of ‘tech’ detailing (circuit looking bits) and just looks at those exhaust pipes!  Even the spikes on the roof are cool.

Wildrider here is a good figure, mainly because it starts with a good form (ie Lockdown).  Luckily the chainsaw and use of the bonnet on his arm didn’t really feature in the comic, so I can be quite happy to leave him with his normal arms and hands, thereby not risking the integrity of the bonnet.  The limited colours work well and make him even more menacing and his size is cleverly hidden in the vehicle mode.  Not my favourite of the set, but still a rocking figure and definitely not a disappointment.

Other Stunticons
MotorMaster
Deadend
Breakdown
Dragstrip.
Posted by Tets at 19:27