The Cars a movie by Pixar was one I never got around to seeing.  The sequel however is another story, mainly because of it having some amusing Japan sections.

After seeing it though, I thought the story was predictable and average at best, but I was terribly impressed at how they managed to make the whole world carry the car theme.  Mountains shaped like Cadillacs as just one small example.  This made me enjoy the movie much more than I thought I would.  All the characters were well suited to their assorted vehicles.  Two in particular caught my eye, and so the hunt for the toys began.


And came to a crashing halt as I found out expensive these toys are. The cheapest I found was just under $10!!  Despite the fact that I was only chasing this guy and Finn McMissile (voiced by Michael Caine), I wasn’t impressed by this hurdle.  Professor Z in particular doesn’t scream out “I am worth $10.”  Let’s have a look why shall we. 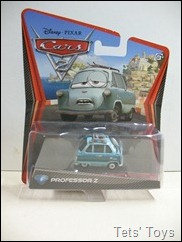 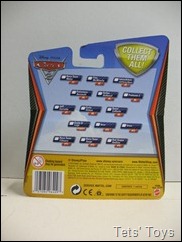 He comes on a simple card blister pack.  Nice artwork for the character.  The thing in particular that tipped me over the edge was that in the movie, I realised that his broken roof rack was meant to be a comb-over for his hair!  ZING! That is brilliant!!  you can see that he is small in the pack.

The Cars toys don’t transform, so all you are getting is a scaled model car with eyes, a mouth and something else.  This guy has a monocle as well.  According to http://pixar.wikia.com/Professor%20_Z, he is a Zundapp Janus.  Fair enough. 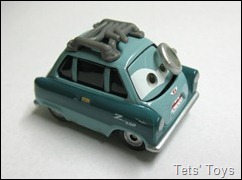 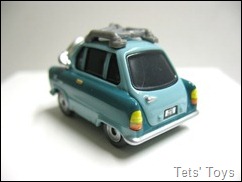 It’s a fairly goofy looking car which could probably go backwards all the time and no-one would notice.   The Prof is an evil scientist type dude in the movie. 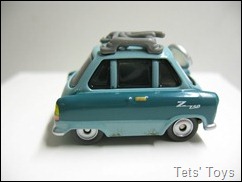 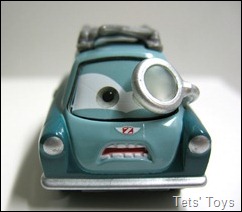 The details is good.  I really like the monocle as it is opaque, but cloudy.  The mouth is well sculpted with nice teeth included and his eyes are painted on, but one of them is squinting a little, to hold his monocle I guess. 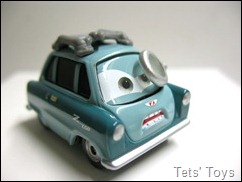 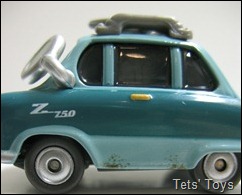 The side has some good paint applications.  It has “Z 250” on the side and an addition I really like are the rust spots on the bottom near the wheels! 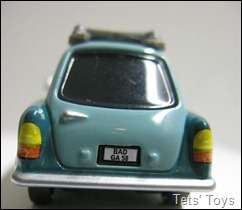 The license plate say “BAD GA 58.”  Again, according to that wikia, its supposed to be for “Bad Guy” but I thought when I first saw it “Bad Gas”  The 58 is supposed to be the last year of production for the car.

Nice paint for the lights there too.

Now for the comb-over.  Man I love this part! 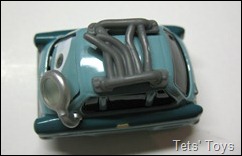 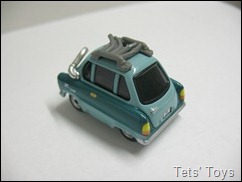 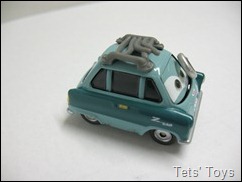 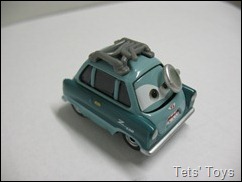 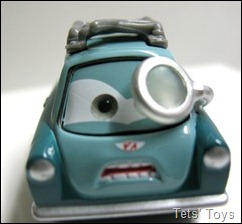 Ha ha ha! Awesome, it truly is awesome.  The show makes it look better as it is coloured properly and looks even more like a comb over. 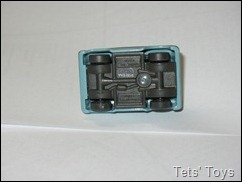 The underside of the car is mildly detailed.  A few exhaust and axel bits.  Not too exciting.

Right, now for size comparison.  Remember at the start I said this toy was $10. 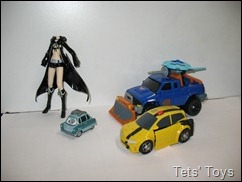 Tiny.  Only just bigger than an Aussie 50 cent coin.  I really cannot see this as being anywhere near the asking price.

Overall it is a nice car toy.  but that is all it is.  I know that really there can’t be a different price for all the toy sizes and they want to keep it simple, but there is now way in hell that this toy is worth $10!  The others, like Finn aren’t either, but being at least double the size can only just be justified at $10, but Professor Z? Nope. Never.  At least Transformers aren’t the only toys us Aussies get the rip off prices on.  That isn’t a good thing though…  Considering how online I could buy a caseload for about $100 (that is about 18 toys), whereas here in Aus, I could only get 10.